It all started Friday. “What are your plans for Memorial Day weekend? Any birthday plans?”

Monday: “What are your plans for Memorial Day? Any birthday plans?”

Tuesday: “Tomorrow’s your birthday… any plans?”

I’m trying to blow it off, like it’s no big deal.  I mean last year I was in complete denial of my birthday that I didn’t want any plans and just wanted the day to vanish.

This year I wanted plans.  I wanted to have a big 40+1 birthday bash.  Somehow I’d get the biggest goal of my list of 40 things I wanted to do in this 40th year, which was get a book autographed by Wil Wheaton.  No, not one off eBay that’s addressed to someone else, his autograph and addressed to me.

I did reach some goals, not that one, and not others.

“You have a choice, have some fun, only you can keep you from having fun”

And someone will read this blog and tell me how selfish I am.  And someone who is married and goes on regular trips with her husband and grown kids and eats with them regularly and goes to bed with her husband, will tell me “they are alone all the time as well, and I need to learn to appreciate being alone.”

Yes, I know I ‘have a choice’ but my choice is to have fun with my dogs, or to plan to go out by myself.  My mom is busy.  My friends who are in the area have kids, they don’t go out at night, and have to make arrangements, which typically means a 90 minute lunch is their limit.  Another friend is a Russian roulette of fun or not.  Plus I really wanted to go out with a group.

I have had 2 birthday parties where I invited over a dozen people and no one showed.  Fortunately they were at places where people were, so I could pretend it was “all about me” for just a bit.

The alone bit has been bothering me lately.  See other than the Seinfeld like episode, I haven’t gone out with a guy in 3 years as of my birthday.  And the Seinfeld episode would only have been a date to him, because that was a guy I met, that asked me out to coffee a few times, and a friend kept saying, “you should give him another chance” when he’d say, “Let’s do something” each time was a bit odder than the last.

Three years ago, I didn’t break up with the long distance boyfriend earlier because this last visit would mean I’d have birthday with his family.  The day of my birthday, his brother wished me happy birthday and gave me a cup of coffee.  His brother had arranged a Memorial Day cookout that day, when the event was almost over my “boyfriend” pulled me aside to tell me how awful I was for making him look bad for not reminding him to tell everyone it was my birthday.

And on that same day,  my grandmother had a stroke and died 2 weeks later.  My grandaddy died one year almost to the hour she did.  They wanted to be together that much.

I was married for 4 years, but that ended 16 years ago.  Dated a guy for almost 4 years, 1/2 of that was long distance so I only saw him once a month.  The boyfriend above was long distance the whole time, and while we dated 15 months, I should have ended it 4 months sooner.  Maybe relationships aren’t my thing.  But I have friends around the world.  I meet people every few months now, that most people dream of meeting.  So why do I feel alone? 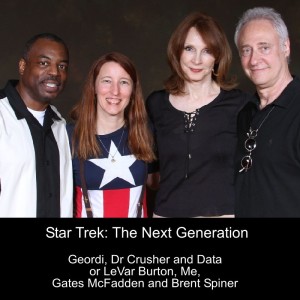 While I don’t have Wil Wheaton’s autograph, I do have a Star Trek themed birthday.   I have never had a themed birthday.  It all started 10 days ago, with going to Dallas Comic Con and meeting 3 people from Star Trek: The Next Generation.  This means I’m only 2 degrees from having met Wil Wheaton, who was Wesley Crusher on the show.

But I said Star Trek birthday theme;  kast week, Mike Morgan sent a link to get the writer’s guide to the original Star Trek series.  A few days ago “Oh Myyyy” by George Takei arrived!  It was an autographed version.

Since the Star Trek theme started 11 days before my birthday, I figure I’ll let it continue for 11 days.   Because while I figured I would wind up watching Star Trek Into Darkness before my birthday I haven’t.  So I’ll be watching it sometime this coming week, probably not tomorrow.  I will probably be designing websites tomorrow.

Another reason the theme is extending is that sometime later this week I will be getting “Beam me up Scotty” by James Doohan WITH HIS AUTOGRAPH.  You may wonder why that’s capitalized…. James Doohan passed away in 2005.  His ashes were sent up into space in 2012.

Who knows, maybe even more Star Trek stuff will come.  🙂

And I’ll have a ton of friends online wish me happy birthday.  I may not get a physical hug, but at least I’ve met Star Trek legends and have virtual hugs.

So my birthday plans are to smile at my Star-Trek themed birthday, thank my friends for FB greetings, and work, that’s the way my life is.