The two stories told yesterday were mostly because they are what is going to make hitting publish on this post difficult.  They didn’t accept that the anorexia developed from pain and I needed love to recover… instead they caused me to retreat further into darkness…

There were times when I felt absolutely nothing. And after weeks of such blank, black nothingness I longed to feel something … anything.

So I would work out until my body cried no more.  I would thin my rose bushes without trying to keep my hands or arms safe, letting the thorns cut my arms.   Because I always have been accident prone, I tend to not notice little cuts and bruises.  So as I got bolder about not worrying about pain, so did the injuries.  But at least sometimes my body would ache from a workout.  Sometimes my body would hurt from a cut or a bruise.  At least if I felt the pain… it meant I was alive.  If a cut bled… it meant I wasn’t dead, even if I felt it.

Because self-harm is something many don’t understand, let me explain.  (or visit Life-Signs)

What self-harm is not…

NOTE: While any of those could be self-harm, they could also be addictions, and obsessive disorders, like hair pulling or head banging.

In some cultures scars are rites of passage, so they harm themselves or allow others to.  This includes removal of skin, cutting, burning and more. Hazing while now mostly “banned” still happens and is another acceptable harm.  And any of these “acceptable methods” could be the gateway to more self-harm.

And it’s not limited to people.  You’ve seen bird pluck their feathers and not in molt.  Dogs can lick until they remove hair, and damage the skin in an area.  Monkeys beat their heads.  Animals run into walls. 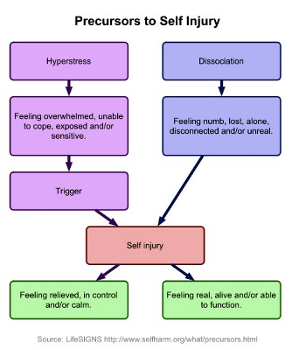 Why do people do it?

Some do it to control the loud rush of thoughts, emotions and otherwise intense feelings.   Others do it to make the outside feel like the inside. For some it is because of the self-loathing. Still others do it to feel something, anything.  And for many it’s a combination of all those factors.

Sadly because the reaction of most people when they find out someone self-harms is panic or shame.  And because people react instead of being a friend, it makes things worse.  People want to lock the person away, or “keep” them from harming themselves, doing everything but being a friend, and listening.  Often people who harm themselves need someone they can trust, to talk about what’s going on in their lives, or have other outlets that allow for the person to relax, and feel safe to be themselves.

I didn’t have those outlets.  I kept everything bottled.  Each time I told someone a secret about my life I heard the “telephone game version” within a week, or they used the information to hurt me.  Basically this was my fault, as I did choose the wrong people to trust and call friends, but it was also a recipe for disaster.

I now have friends whom I trust.  There are a couple who knew that one day I would write this blog post, and have warned that discussing self-harm can result in a lot of confusion and people thinking things are not ok, or like I said above… that it’s suicidal or attention seeking.

Actually, in this case it is attention seeking…

I’m seeking your awareness and attention.  Because one thing this blog has taught me… I’m not alone.  And there’s another reason I’m doing this… but that’s tomorrow’s confession.

And to those friends (and WM) whom I have not told yet… I’m sorry I’m confessing it this way.  It’s not an easy truth to just blurt out over coffee or dinner…