Many people know I’m pretty happy,  (even silly with close friends) but  to some this may come as a surprise with these confessions of late.  These confessions are not about saying I am that, they are about discovering me (more about that in Confession 8), because truth is I am happier than I have been in a long time.

WM and I *FINALLY* got our timing right.

I have wonderful friends (to all of you thank you!!).

And I have the courage to build better relationships and step away from those who are out to harm rather than mutually build.

I have two wonderful English Cockers, a lab rott and a black cat, and they are mostly wonderful.  The cocker puppy is a little bed hog.

Lately I’ve had work.  Thank you Denise Griffitts, Andy Grant, Brian, and some others.  Making money and paying bills is a good thing.

And I love what I do mostly.  I’d love to have a bit more work.  And I’d love to become an author.  I just haven’t been writing like I should to become that author.  (more about that in another confession).

There have been some people who have told me saying anything less than happy on FB is bad.  I realized today, if I asked these same people if lying was acceptable they would say it is not.  So I guess lying on Facebook is acceptable?

So yes, I am honest in how I feel on Facebook.  Besides which, Facebook is already like looking at all the best things of everyone.  Why should I lie, when I can be real and maybe make a difference? 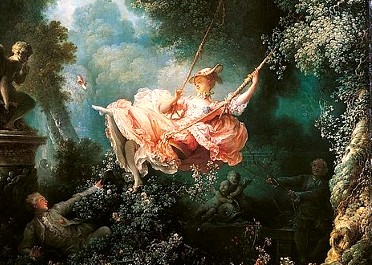 L’escarpolette (The Swing) by Jean-Honoré Fragonard

I have always been a wee bit uptight and serious.

At 4, my granddad gave me a coin to throw in a wish fountain at the hospital.  He said something like wish your grandmother better and to come home.  I don’t remember my words, but they were along the lines of, she’ll get better but she isn’t coming home, said in a factual manner. I remember his face.  He was shocked.

She died sometime after, and he remarried shortly after that.  And at 8 or 9 I told my parents that I didn’t want my brother (he was 3 or 4) around them (Grandad and his wife). I felt he was not safe.  They listened.  My parents and I don’t remember why I felt this way, but they were glad that I had told them.

Since I always study, both in my youth and now, I tend to spit out facts.  As an adult I work to control it. The dyslexia keeps me from spitting out math answers, and frankly I’m trying to figure out if you said 9-5-4 or 5-9-4 or maybe it was …

And if you ask what I do, I try to figure out how to answer the question on your level, and not get overly excited.  If I get excited, I’ll start spitting out facts about websites, SEO, design, social media.  So I try to watch for your eyes to glaze over, but sometimes you and I are both just riders in that fact filled train.

If you were to visit me while I am working you would probably think I am mad, or dislike what I do.  I look extremely serious.  In fact I inch ever closer to the screen until I am way closer than I should be, but this is how I’ve always been.

I remember being in a child and asked, “Why don’t you smile?”  This even happened when I was playing.  If I had $100 for every person who told me to smile when I was a kid I’d have quite a bit in savings.  (Let’s be honest a nickel isn’t much!)

These weren’t times when I was unhappy, but I looked serious.  As I got a little older I learned to “lie” and smile no matter what I was feeling.  Perhaps this is why it was so easy to stop having emotions.

Since I’ve become an adult I have wondered if maybe I’m autistic, and somehow give off the wrong vibe.  Maybe this probably why I was so susceptible to people who used me, who used gaslighting techniques to deceive me.

Which actually leads into the next Confession.  Confession 8 – These Confessions are surprising even me