Confession 9b: I am a Highly Sensitive Person

9b?  Yes, there was a 9. It’s now a private post.  I sent it to one of my best friends; Janet, she’s been trying to help me see the real me.  She sent me to the Highly Sensitive Person test again. And told me to take the test again. (God bless her)

Of the 27 questions I easily answered 20 with a positive.  2 others I could have answered as well.

Since then I’ve read that I could actually answer a few more.  The question about sensitive to caffeine is a no, but other places talk about other medicines, which is very much a yes.  There are medicines that I only take if absolutely necessary and tell someone when I do.

I’ve been called overly sensitive in the most negative of ways, so this was not something I wanted to test positive for, yet I did.  And reading what it means to be a HSP (highly sensitive person) makes more sense than being autistic which although it didn’t make sense, I kept wondering if I was.

I have been watching The Big Bang Theory and in some ways I relate to Sheldon’s very factual self.  I realize that I’m not good at sales, because selling involves “Selling the sizzle” and I want the Steak.  “Sell the benefits” when I want the features.   But the problem with Autism is that you can’t read people, and…

I Feel Other People’s Pain

No, I am not sensitive to my own physical pain, which was one of the questions.  I’ve been asked how I got a bruise or cut, and have no idea.  I’ve been known to see blood and wonder where I cut myself.

One question asks if I notice when someone is uncomfortable in a physical environment, and just know what they need… I said no.   That being said like, if I see someone hurting I feel it.  I play strong for the person, only to cry it out later.

I’ve done things out of my character to offer support for someone hurting, like resting my hand on the hand of a stranger.   I’ve gone on a stage and put my hand on the speaker’s shoulder.   It wasn’t a speaker I knew really well, but she was struggling with her emotions, and I offered my strength through the touch, and she was grateful.  I’ve brought tissues to people when no one else noticed they were crying.  And made people laugh when I see they want a break in the tension.

As much as I like action movies, there scenes when someone is hurting (or should be) and I feel pain.  And I don’t watch horror, especially when the monster is a person who is just crazy because it totally overwhelms me. 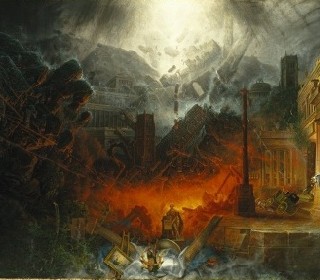 The Edge of Doom by Samuel Colman

Honestly I’ve been overwhelmed for several months and I hadn’t realized how much so until the past week.

I have always played music while I worked, even at jobs if I could.  I have had music on super quiet lately.  I can’t find a place in my house where the light doesn’t bother me.  My office chair is uncomfortable.

These things sound minor but they put the overwhelm over the top. So I’ve actually been feeling kind of like this picture to the right…  I have been feeling completely destroyed.

I am not used to showing weakness.

Weaknesses have been used against me so many times… but I need to confront some things that are causing this overwhelm.  So it took major major effort on my part to admit that I was having trouble with my faith, last week.  I got all these great and loving responses, private messages and a phone call.   The phone call was from an unknown number, albeit a good friend.

And yet I felt exposed like a raw nerve for a couple of days.  (again like the picture)

I wanted to reach out to people who responded and say thank you and tell them more… see that would require another round of conversation and I needed space… (For those of you I’m supposed to email… I’ve terribly sorry but this is unfortunately true.)

I walk every day.  People think I do it for a variety of reasons, but the truth is I use it to give myself space.  I’ve assumed it’s the introvert in me that cases a party, event, or seminar for the quietest corner, the bathroom that’s furthest away from the action.  And I’ll go that way when I get overwhelmed.

Sometimes I draw.  This is partly ADD.  I can focus on the preacher if I let my hand idly doodle. I learned this in school, when a teacher would catch me doodling and ask “What was I just talking about?” and I could answer.

Then I shut down

But sometimes hyper focus doesn’t work.  And I shut down.  I start playing game after game of solitaire or suduko. This is especially true if I don’t know what I feel.  I feel conflicted.

Every feeling is shouting at me for their attention, anger, frustration, tired, happy, sad, disappointed, giddy, worried, overjoyed, underwhelmed.

On one such day I was trying to take a course on Udemy and the instructor asked “What if someone paid you a million dollars to work on what you are feeling?…” I honestly don’t remember what he asked next, because I was like for a million dollars I don’t know if I could tell you what I’m feeling.  I’d very much try, probably frustration then because I’d want a good answer…

I keep hesitating on writing the final confession posts, because while I know the subject matter, I don’t know what to say.