Confession: I’m trying not to hate … me

I’ve been working on these feelings, because they were extremely large… like Incredible Hulk large… and raging like him.

But who am I most mad at?  Who makes me angry most of all?  Who do I hate? 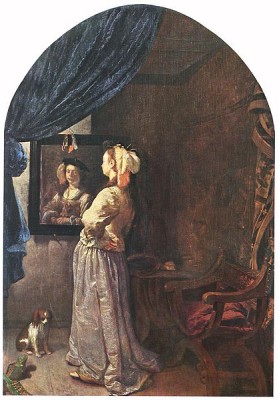 Frans Van Mieris (I) -Woman before the Mirror

I have screamed in the mirror and told that person standing there “I HATE YOU!!!” “YOU ARE WORTHLESS!”  “HOW DID YOU GET TO BE SUCH A F* UP?”  “CAN’T YOU DO ANYTHING RIGHT?”

Obviously these were true, since I heard them from people who shouldn’t tell their friend, employee, or girlfriend such things.

For years, anger and hatred were the only emotions I had.

It started with locking away one emotion, then another, and before I knew it they were all gone.  (Except at night when I cried myself awake).  But I was the “wife” that my husband wanted, just a shadow in the background that worked 2 or 3 jobs, and fixed dinners I didn’t eat.

Years later when I started to bring my emotions to the surface again, a whole series of events happened that made me realize trying to deal with emotions locked inside for 7 years was “unsafe” in the environment I was in.

But keeping all emotions in check is difficult for Vulcans (Star Trek reference).  And locking those emotions away builds silent waves that grow into a Tsunami of rage, anger and hatred.

I lash out at others unfortunately, which only increases my rage, anger, and self-hatred.

What’s Wrong With Me?

One of my first memories is of when I was 3 or so.  One grandmother questioning “What’s wrong with *her*?” because of the way I was sitting.  The other rebuffed her.  What she said, I don’t remember.  But this question has been on my mind many times since.

“What’s wrong with me that people keep telling me I’m crazy?” “Why am I such a screw up?  I must be… since friends and bosses keep saying it.”  “Am I really so horrible that I’m lucky they would ‘even put up with me?'”

Why was I raped?  Why do I attract these people?  What is so f*ing wrong with me that this is the life I deserve?  I must be one messed up person.

And the hatred grew and grew.

Finally I realized I shouldn’t hate me, and I started trying to love me…

But My Self-Hatred isn’t gone…

But now the self-hatred is often replaced with huge self-disappointment.

And so sometimes I disappear from Social Media, because I am upset with the disappointment that is me.  And when it’s gone on for a while I seek help via Social Media using various methods to ask for encouragement… because I’m trying to break the downward spiral…