The Cost of Standing Up to Help…

The Year: 2001
An Invitation: Dinner at 7, at the home of a couple from the church

I needed to make friends with adults, and after the marriage, and the loss of friends before, this seemed like the perfect occasion.  I say my age, because I actually had friends, 3 to 6 teenagers would spend Sunday afternoon at my house.  I was a youth minister.  I had been for a couple years.   And the group had grown from one to ten… which was a nice growth for a small church.  I was attending things with them and things with other youth ministers.

It was time to grow! And this invite was the sign of good things to come!  Dinner was ok, strangely tense and terse, but obviously I was over-reading it since they invited me stay and talk.

But talk is not what happened.  The conversation would have been better suited for a small room, with a brown table, one officer across the table and the other leaning against the wall… a far cry from setting of the plush feeling antique looking furniture and the beautiful Oriental rug.  The stairs that whispered of times gone by would soon look as beautiful as EXIT sign when you are trying to escape a building with monsters.

The MPs are here 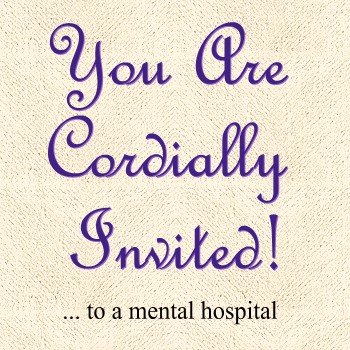 8:30 am they are at my drive, arriving like MPs (military police) ready to grab both arms in case I run.  They take me to a mental hospital.  And after some paperwork, I get a band and taken back to talk to a doctor.   He shakes my hand and raises an eyebrow.

He chuckles, “So do I.  What do you do for fun?” “Youth minister, have teens over every weekend, part of why I work 3 jobs.”

We talk for 30 minutes, a casual conversation with one or the other of us chuckling.  The most pleasant conversation I’d had in probably a year.    He asks a few questions about my current eating habits.  Then he asks, “Do you have a support structure?”  My face falls…  “I thought them….”  He sighs and says quietly, “You need a new support structure.”

He escorts me out where they are waiting anxiously.  I should have just left them and walked home, but I thought that was rude… so I didn’t.  Instead I thanked the doctor, the front desk person and asked politely this couple to drive me home.

While I was polite about that, when they started asking all sorts of questions about what I told him, including if I told him that I missed meals.  I just stared straight ahead.   But at this time I wonder if this is why there is such a large issue with suicide in this area, that people would rather call you crazy than try to be a supportive friend.

The Cost of Standing Up To Help

After I got home, I couldn’t help but wonder how this happened.  What got them to interrogate me so? It seemed they were trying to “report me” for having been an anorexic which was something I hadn’t told … anyone… other than…. Oh …

A month before I went to a youth minister conference.   I was one of the few if only women there.  Not that this bothered me, it was pretty standard for my life at the time.  But at one of the meetings, we were discussing things “our kids” were going through, and one of them talked about having a girl with an eating disorder in his group and he had no idea how to talk to her.

Since this was something I could relate to, I had said, “I was anorexic, if you need someone to talk to her please let me know.”

For that single statement, my “friends” at church wanted me sent away.  They and a couple other people suddenly got involved in the youth group and would “forget” to invite me to meetings.  This group banned together in forgetting and blocking my access to the youth. After a while I walked away.  It hurt to have the thing I looked forward to each week taken away.

While it cost my youth group, the fact that someone out there needed someone to talk to and was denied was in my awareness.  Add to it the growing following on my blog saying they understood and had been there at the social media service pre MySpace which was pre Facebook.

Tomorrow: The Cost of Standing Up for Myself