If the title is strangely familiar, that would be because it’s a play on “Dr. Strangelove or: How I Learned to Stop Worrying and Love the Bomb” a film from 1964.  While it is a classic, it is not one that is easy to come by, and I have not seen it yet.

I have several pets.  Three dogs and two cats, of this 5, 3 are seniors.  One cat is 13, two dogs are 12.  Last year Luna, my white English Cocker was diagnosed with hypothyroidism and went on thyroid meds.  Butch, a lab/rott mix has some dementia.  Then just 60 days ago, my 13 year old black cat; Salem went to the vet’s office because he wasn’t well.

He was admitted to the Vet Hospital, spending the night.  He was eating.  He was coming home tomorrow.  He wasn’t eating. He wasn’t coming home. Up and down.  I visited him one day, he was happy, purring, pushing against me, wanting me to hold him (one of his least favorite things normally)… that is until he realized I wasn’t going to take him home that day.  He spent 4 days on IVs and in ICU at the Vet’s office.  (They took him off the IV to talk to me.) 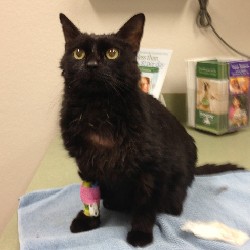 Salem with the IV thing

He had developed pancreatitis.  In layman’s terms, he had inflammation of the pancreas.   This organ helps with digestion with digestive enzymes that assist in the absorption of nutrients and hormones such as insulin.

The day I picked him up was painful.  A huge bill.  Multiple medicines, each with different schedules.  The diagnosis.  The food. The needles.  The new lifestyle for him, for the other cat, for me.  The vet’s discourse on what was wrong with Salem before, currently, his future, what the medicines do, what I needed to do, what could happen, and on and on…  I appreciate the vet’s thoroughness but this information was overwhelming, especially with the words insulin, needles.

How I Learned to Stop Worrying and Love Needles

I probably missed well over half of the shots the first week, but I dare not give another in case I did hit.  Too much insulin was worse than too little.  It took 4 ($150 per) visits over the course of 6 weeks to get his blood sugar “stable.”  It was scary.

But in 60 days I have learned to give the shots.  I am confident in giving them now.  Mostly, he decided to run off when I poked him yesterday so he had the needle in his back as he escapes me and I’m trying not to vomit.

I got the meter to test his blood two weeks ago.  We are up to poking his ears, but I can’t get them to bleed, so that I can test his blood sugar; hopefully soon.  Then I can start testing different foods that will help him.

But financially it has really hurt me.   Today my “Outrageous Request” challenge: please help by visiting and buying something from Media Guard Group.  I enjoy helping people express their passion online, so I design websites with your passion in mind.  But you also need security to protect that passion… and you can get a special price on this special Security package.

And if you have any advice on Feline Diabetes, please share.

And of course I’d love to see some comments below!
Thank you!
MJ Schrader