I Was in a Seinfeld Episode

Ok, I wasn’t really in a Seinfeld Episode, but after telling a friend about it, I suddenly realized I was in a way.  And we got to laughing about how funny this whole episode would be if it had been Elaine instead of me.

This actually happened a few months ago.  While it was crazy and funny, I didn’t want to share the story right away because I didn’t want to be disrespectful of him, but the story is too funny not to share…  names have been changed to protect the party involved.

I met this guy online.  He happens to be in the same city I am.

During which he tells me he “loves” sushi… and I comment “A Japanese sushi and hibachi just opened.”

We go out for coffee a few times… but he’s a very bizarre little man. He uses a different name every time we go to Starbucks, “So they don’t know my name.”  (Because his is such an uncommon name, that it’s been on the top 10 boy names since FOREVER) 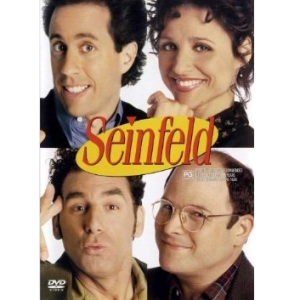 Although we don’t have much in common, I figure I need to get out, and he pays for it.

So after a few  coffee “dates”, he wants to meet again at the Japanese sushi and hibachi.

I get there, he’s already there.  The waitress asks if we want a Hibachi table…  I’ve never been to one, so I’m like, “YES YES YES”

She seats us at the hibachi table.  She asked if we wanted sushi, and I said yes, so she hands me the paper with the current sushi prices.

Now, we both have menus.  He sees that I have the paper and he asks what it is, I say the sushi order list, which he grabs, and the pencil.  He loves sushi, so he must want to check prices, I go to the regular menu … I want to see what’s on the sushi rolls or samplers.

Not paying attention to him, I say “Oh salmon, tuna, yellow…” and from the corner of my eye I notice he is marking all these boxes…  I say “those are like $4 EACH… the rolls are a lot more sushi for the money… like $10 for 5 rolls.

So he asks me about ordering rolls. I say I am looking at the “Samurai roll, cause it has all 3” So he me marks it, then realizes he should put a number not an x.

Then he finally starts looking at the menu and decides to get a sampler.  So he marks that…  the waitress comes and he has to explain ignore all the marks just go with this one mark on the sampler.  So apparently we are splitting the sampler.

She goes away to get our sushi order placed, and the other people’s drink order placed.  I’m now trying to wish myself over with the others because they are all one group of young women having fun for the one on the far side’s birthday.

The waitress comes back with drinks for the ladies and to take hibachi orders.

He leaves for the restroom, so it’s almost like I’m part of their group.  While he’s gone, the waitress brings our sushi.  I put my half on my plate, and put the soy sauce in my little soy plate thingie…

He comes back and asks what the soy plate thing is…  (it’s just bigger than one piece of sushi, so it’s a miniature sushi plate… idiot… but I didn’t say that, instead I simply point to my plate full of soy sauce and say, “for your soy sauce.”)

Then she comes out with salads and soup for everyone at the table.  The miso soup is excellent, so I drink it up…  He asks “what kind of soup is that?”

Even my mom, who has never been to a Japanese restaurant, knows Miso comes with the meal,  but I answer patiently “Miso soup” .

The hibachi cook comes out and starts putting on a show… I’m like “nice, nice.”

He is stage whispering… “He’s going to cook for us?…. you mean we get a dinner and a show?”

Apparently my attempt at a poker face failed with this question, “That’s what the hibachi table is, and why there’s a grill there…” pointing at the grill with the hibachi cook and his sizzling butter.

Dude cooks dinner, it’s lovely.  The cook gives me some shrimp and some fried rice even though I didn’t order either I think he felt sorry for me….

The cook leaves and we are left to enjoy our meal.  Tom is fortunately quiet, which allows me to enjoy my surroundings.

Tom is all into desserts and sharing of said course… so it’s time for dessert.  He looks at the menu, Green Tea Ice Cream and Red Bean Ice Cream…. He’s mortified.  (I’m amused at how ridiculous this whole evening is… and how I no longer feel bad for anything he buys me or food I order, he is paying for my time)

I explain Green Tea, yes, it’s a sweet ice cream.  It just happens to be green, and taste a bit minty and “green tea like.”

Red Beans are not like those from New Orleans they are a sweet bean….  (Thinking to myself guess I’d horrify you if I said I’d like to order Halo Halo, a bowl of shaved ice with red beans, rice, taro, sprouts, jelly strings, and lord knows what else…)   The waitress tells us they have some fried bananas with a scoop of ice cream that aren’t on the menu…

Since I know he is going to want to “split” whatever dessert we get, and I know the ice cream is a small portion, and my portion will be touching his portion… and he’s going to be weird about anything too crazy, I say let’s get the fried bananas.  Dessert is thankfully short, because while it has been an amusing evening, I’m ready for it to be done.