You Aren’t Picky, You Know What You Want

In November 2010, while sitting next to a guy who didn’t love me, I swore I wouldn’t date again unless the guy was incredibly special.

I had been told numerous times I was too picky or expecting too much. Yet, I decided that dating guys who didn’t love me,  treat me with respect, didn’t care enough to bring me medicine when I was sick, or appreciate me, weren’t worth my time and energy. And I honestly figured that was the end of that…

In June 2013, an old friend Facebook messaged me. He was concerned about the fact I had 4 panic attacks in the past year. Soon we were emailing, then texting. And then he asked if we could meet. We hadn’t seen each other in person since 2000. That was the last year I worked at the motorcycle shop, where he used to order parts from.

We went to DQ for a blizzard, movie and dinner days later. Soon we were dating.

He accepted me for me… and he showed me love I had never seen from a man towards me.

About six weeks after we started dating, I found out some personal medical news that was/is hard for me. While it was news that I knew was coming, it still was heart-breaking. When I said I needed help dealing with the news, he came over. He talked me through parts of it. Just sat and held me other times while I cried about it. He didn’t offer solutions, for there were none to give.

We discussed what I could tell people, since it is something people might ask about, but the best solution was to keep it as private as possible. (Which is why I’m not addressing what the issue is)

Every guy I’ve gone out with prior had told me “Well, if you are going to cry, I’m going to leave.” This one came over to my house knowing I wasn’t ok, and I was going to be crying and held me while I cried. 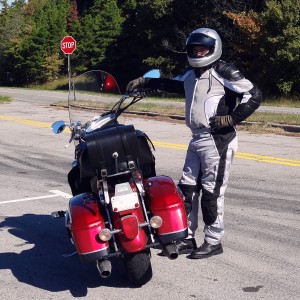 A few weeks later, while at his house I had the worst migraine I’ve ever had. An hour or so before I was going to leave I noticed I was slurring while talking. This is a sign that I have a migraine coming, if I’m lucky I can take Excedrin then, and it may get worse before it gets better but won’t go to full migraine. I wasn’t lucky.

I was getting worse as it got closer and closer to time to go. He was worried about me. He asked me which roads I drive home. (It’s a 45 minute drive). I tried to explain it. I was no longer just slurring, I wasn’t making sense. I couldn’t figure out how to say words like Caddo Mills. (Actually I could say Caddo but not Mills). I was trying desperately to make the right words come out, but either I couldn’t find a right word or was talking jibberish.

To know how scary it is, watch this video. She had a migraine with Aphasia.

He insisted I stay the night, but by then I could no longer talk at all. So I couldn’t tell him how much I wanted one of his t-shirts so I could be more comfortable than in my clothes.

Unfortunately when I’m stressed, I “fall asleep” with the actual sensation of falling, so my legs jerk. (Hypnic Jerk) Normally it’s minor and happens once or twice. This night however, the spasms were much more drastic and a lot more often. He was worried about me, so he slept close to me all night.

The next day, he told me that he was scared I was having a stroke when the migraine started. When I was having the spasms, he prayed for me…

All the time we missed

A few months later, I was upset that we didn’t get together years and years before. We had already met, we had wanted to date then, but things never quite worked out. I was irritated that we “missed” all the years together.

He reminded me that although I saw some of the things as bad, it may have been exactly what we needed. We needed to go through more things to appreciate each other. We had to go through things to make us who we are now. Or it may not have even been us, perhaps we needed to be there for someone else.

Your past shapes YOU!

Which is part of why I’m sharing this. Sometimes what seems bad now, turns into something that guides you on a better path. Something you think of as bad, may help you develop as a person. Timing may seem off, but there may be a reason behind it.

The other reason I shared this story, is that while others may tell you that your dreams or goals are too big, impossible, or you are being too picky, you may not be. It’s far better to know what you want and go after it. And if you aren’t certain of what you want, or don’t think it’s possible, to walk away from what you don’t want, even things you simply accept. It’s ok to dream big, be picky, want what you want.

Look at your life and ask “What am I settling for?”

You are a beautiful person who deserves the very best, and you shouldn’t settle.

*NOTE: If you think the blog changed in appearance, you’d be right.  As a web-designer I do like to change it up on occasion, but I do try to keep the same feel.