You Can Save A Life

This week is another post about Robin Williams and how to save a life.  Lots of people had opinions about his death and suicide in general.

Just two years ago someone told me “normal people” don’t think about suicide.

That sounds pretty presumptuous.  So you know EVERY thought in other people’s heads?

There are times when a school or business goes through a series of deaths and suicides.  Then yes, suicide goes through your mind.  That is the reason there are now counselors on hand after a suicide, does that really mean all those people are “not normal”?  No, it’s part of life.

One I saw many people searching for was how / why could someone leave behind loved ones.  But people must consider suicide for a while before they would commit a sudden act? Why don’t they think of others?

In the moment, the only people they know of are those who disapprove, who dislike, who don’t seem to like never mind love them.  The pain of this becomes too much to bear.

Thank you lady at Whataburger for seeing that.

You see, the only reason that I’m still here is because of a lady at Whataburger, and I don’t know what she saw, but I want you to “feel” the pain of the person she saved and maybe you can save a life as well.

It had been a good day, but now it was Friday night.  I was still married, which meant that it was “date night” with the now ex-husband and his father. 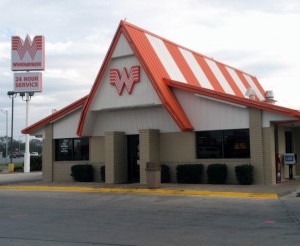 Greasy food doesn’t get along with my stomach, something I inherited from my dad.  This however, was their favorite type of food.  We went out for burgers at least twice a week.  Buying “healthy” or “semi-healthy” foods was discouraged, so what little I did get had to be secretly brought into my own home

While they would ask me where I wanted to eat, my answer should be Whataburger, with slight possibly correct answers of Jack In The Box, or Wendy’s.  If my answer wasn’t one of those, it was ignored or passed over until I answered correctly.

That’s ok, I had options for dinner… as long I picked a burger of some sort.  Actually it was to be a combo, even though I didn’t really care for fries.  I never have been a fan of fast food fries.  So I would eat 2 or 3 and they would eat the rest.

When the food came out, the conversations would start.  I would be asked “How are you” and they would start talking before I finished answering.

The Game Ended and I Lost

The world outside melted.  It was just this restaurant and this weekly game that I was tired of.

They got the order while I thought about how old the game was.  The hamburger and fries were especially shiny with grease.  I sat staring at it, I knew the question was coming.  Thinking of how old the game was, I decided I wanted to answer with something that proved they never listened.

“How are you?” asked his father.

What escaped my lips was an answer as dry as un-buttered toast, an answer that should have shocked them because it certainly shocked me, “I’m gonna get a gun and shoot myself.”

They didn’t hear it.  They were already talking.  The day no longer mattered.   They didn’t care.  My world was now the two people who didn’t care if I died and strangers.   This game was over. I lost.

I dumped the fries out of the paper cup, and moved them around, pretending I ate some. The same as I had been doing for months but this time I was stalling to find some alternate solution to this game end.   I would go to the bathroom and decide my fate.

But the only pieces I could see where these two who didn’t care and the 2 miles of strangers between here and my home where I could die, without hurting anyone.  Dying in a fast food place was bad for the kid (I was thinking of fast food employees) who would find me.  So I would leave the restroom, walk out the front door, walk home where these two would welcome my death and end this charade of a life and no one would care.

The Lady at Whataburger

There was a lady in the hall when I came out.  I was looking down, but my goal was the front door behind her, the door that would lead to my end.  But she blocked the hall, both toward that door and the door back toward the restaurant.

“You deserve better” she said…  the word echoed dully in my head.

The words were warmer, softer, “you deserve better than them….” The last two words were with a shrug of her head toward the ex and his father over her shoulder.

She said another sentence or two but that sentence was the start of my realization that this “marriage” was a sham.

She Helped Me Win

I sat down with them once again, I looked at them.  This wasn’t right.  I wasn’t certain what I needed to do, but no one deserved this. I knew I needed to live. Later I would remember that I had a vision, at age 10 that I would live through something hard, and need to tell others, both so they could survive and so people would see the pain others live through and find ways to help.

One of these two reasons is why you are reading this blog.

If you think “normal people” don’t think about suicide, think about the fact the brain thinks loads of thoughts in any instant.  Add in other people, environment, things in life going up and going down,  and hearing about deaths and suicides and it’s not that abnormal.  You only know what is in your own head and what people decide to share.

Abuse IS happening.  And people abused are well versed in hiding it.  So you may not even realize someone you know, even love is being abused.  But as well versed as they are, chances are there are signs, but it requires looking and noticing people.

The lady at Whataburger noticed.  Yes, she may simply have overheard, but in retrospect she was someone who knew what a physically abused life was like, she knew this conversation needed to be brief and look nonchalant to not catch attention.

While that wasn’t technically necessary in this case, in many abuse cases this is extremely important.  A possessive abuser might notice, and would have been accusatory before getting into very physical abuse. 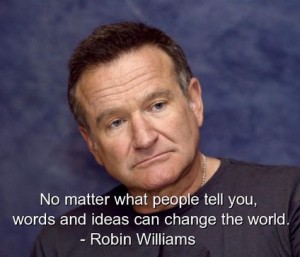 Sadly he was.  His abuser was himself.  While it may appear that he was successful, he had committed to a TV series that didn’t pass the first year butcher block.  In other words, he lost a job. He lost a steady income.  And while he may earn more than average, he just like any of us, longed for that steady income.

Chances are he was feeling like a failure.  How could his family love someone who couldn’t keep a job?   Every time anyone told him that he was washed up, a failure, not worth it, was playing in infinite loop.  And he felt like his game was over.

Someone noticing, might not have changed Robin William’s life.  But you never know what might make a difference.

Different foods bother different people.  Cucumbers make some people sick, but not everyone.  We are all different, but we all have a heart, and we can use that to see people and make a difference in this world.

We can all step and notice if someone is hurting and try to offer love.  Change may not come with you noticing and telling someone they are worth it, but it may be the first light a person has seen in a while.

Because no, I didn’t leave the relationship right away.  But that lady made a difference in my life. She was the one who stepped up and said I deserved better, and made certain I understood.

17 years have passed, I still don’t eat at Whataburger.  But when I see the restaurant, instead of remembering the bad times I remember the lady stopping me.

She saved my life.