I haven’t been writing in my personal blog (here) like I should… or like I once did, so I decided to do the Ultimate Blog Challenge.  But there is a caveat…  which I’ll just leave until later…

Change is inevitable (except from a vending machine)

For regular readers, you may notice the site changed.  I’m a web designer, this is what I do!  But I’ll explain that later, and in fact here are some posts titles of things that have changed recently… I’ll add links as I write the posts.

I’m not even certain where to start… Although I learned from Lewis Carroll’s Alice in Wonderland to “Begin at the beginning and go on till you come to the end: then stop,” this story doesn’t really have a beginning, since much of it happened concurrently. 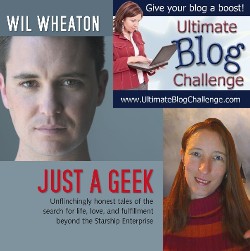 So let’s start with 2001, going back to my birth was a bit too far…  Ok Seriously, for Christmas 2012  I got Just a Geek by Wil Wheaton.  He is telling stories from when his blog was brand new (2001), and this is like a flashback to me.   I remember  reading his blog, he was one of the few other bloggers at the time. It was so cool to me to see “that kid from Star Trek” have his own website.  (Technically I’m two months older, but it was cool seeing a kid on Star Trek The Next Generation.  And while I didn’t have a crush on him in ST:TNG Days, I developed a geek crush on him then. It was cool that he was building websites, and I was as well!  We both had web-logs, as they were often called then. Because I kept losing my paper journals, my blog was on some site pre-MySpace with no thought that anyone was reading my blog. Eventually I moved my “blog” to MySpace and didn’t bring any posts over but every so often I would get comments… “I’ve been reading your blog for years!  Thank you for sharing your life.”  I’d see these and say what???  Then I moved from MySpace to LoveRockstar, as MJSchrader wasn’t available, from there to MJSchrader.  I moved some of the MySpace posts so you can actually read all the way back to 2007, I didn’t move the older ones, and really regret that I didn’t keep my original posts.

But his book is reminding me of that time.  I used to write a lot more often back then, which is why I accepted this challenge, and why I plan to write more often even after.  It is reminding me I used to write short posts with simple thoughts instead of waiting a month or two and then having too much inside my head. It also reminded me that one of my resolutions was to get a book autographed by him for / before my birthday in 2 months (which is to the day, 2 months before his).   Hopefully with this post and the post tomorrow something will happen to get me closer to that dream…. Bye for now, Live, laugh, Love, MJ Schrader